The Humbling Beauty of Nature

"The mountains are calling and I must go..." 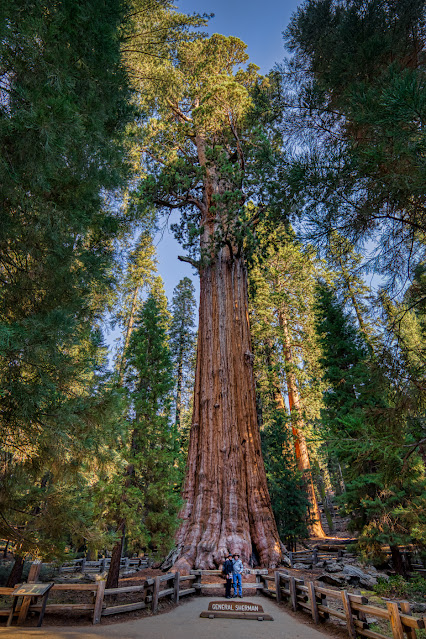 When plans change and you have an opportunity, we have learned to take it as it might not come again.  Since we had not unloaded our RV from a previous short trip, we repacked a few essentials and left for the mountains.  This is a trip we used to do on a Friday after work.  We would pack an overnight back, load them on our motorcycles and head to Visalia for the night.  We would get up early and ride into Sequoia National Park before the majority of visitors were even up.  That afforded us clear roads, time enough to ride through Giants and into Kings Canyon and home by late afternoon.

This time, no motorcycle and staying in 3 Rivers for a few days so we could drive in and out at our leisure.  We still went in early, cooler temps, as it stayed warmer than expected and again fewer people.

Our first stop was along side the road as we climbed up the mountain side on the road which was constructed in 1926 to accommodate vehicles.  The original road was made in 1903.

As we came around a corner, I noticed something black in an Oak tree.  As we got closer, I noticed it was a small Black Bear.  Eating acorns, high in the tree.  So we stopped, I changed lenses so I could hopefully get a picture from a distance.  Since the bear was small, I was sure there was a mama bear close by. 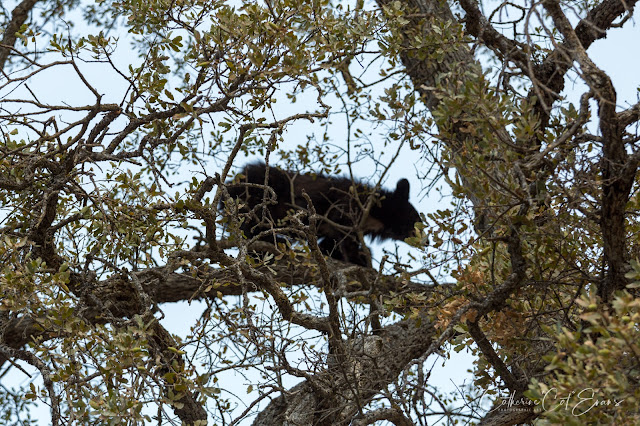 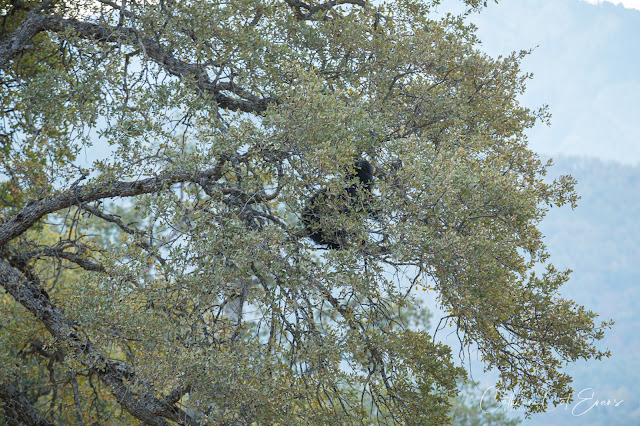 The air was still very smoky so the skies were very hazy. 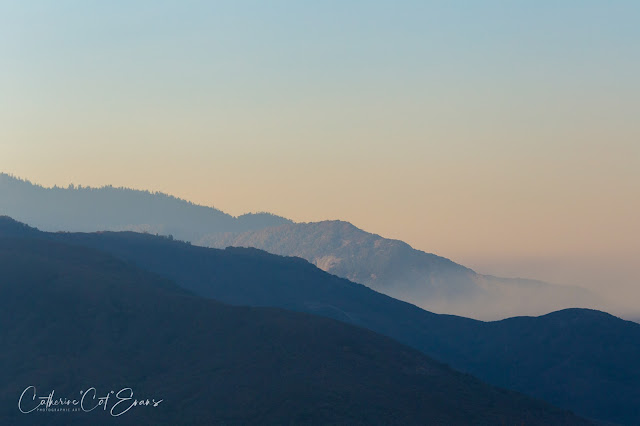 The next stop was through the Giants and the General Sherman Tree.  It is the largest tree on our planet right now and to stand at its base is very humbling. 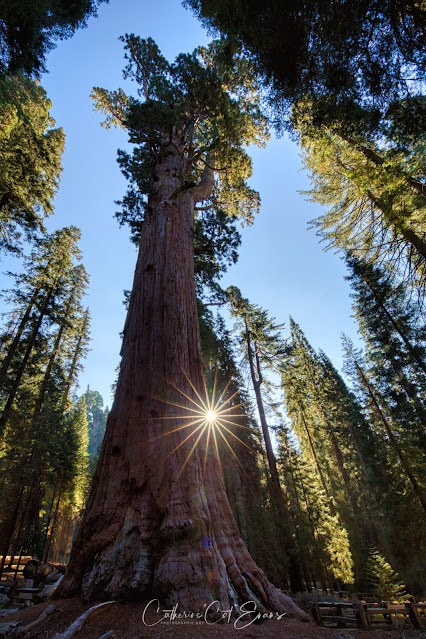 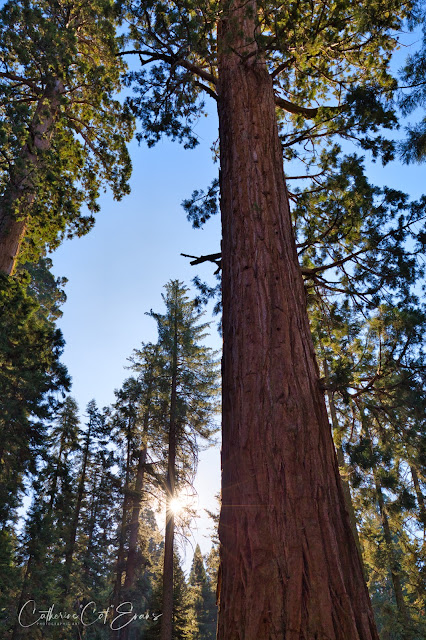 After walking around the Giants for a bit, we drove back to Moro Rock.  Which is not to be confused with Morro Rock, here on the central coast in Morro Bay.

To get to the top of a 797' stairway, you must climb 400 steps at 6725' elevation.  Thankfully there were many spots to stop and catch your breath.  But the climb was worth it. 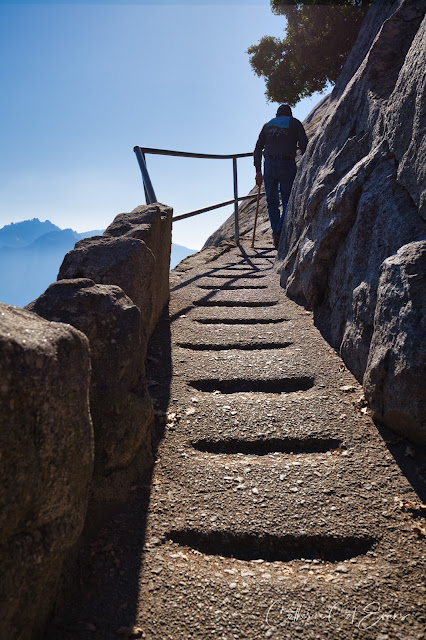 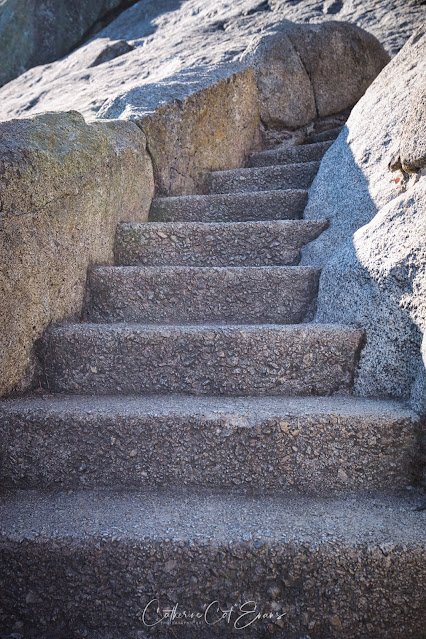 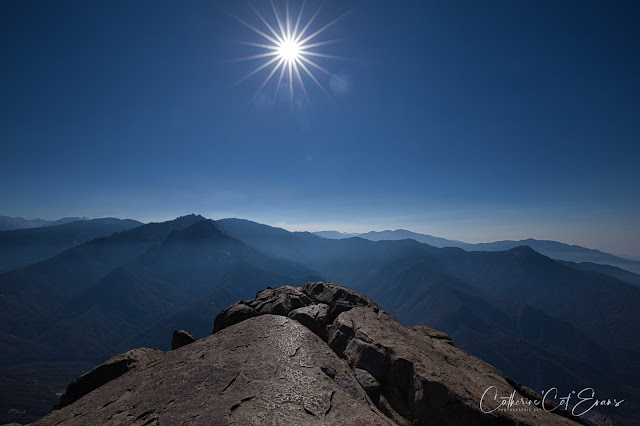 Posted by Catherine "Cat" Evans at Wednesday, November 04, 2020 No comments: 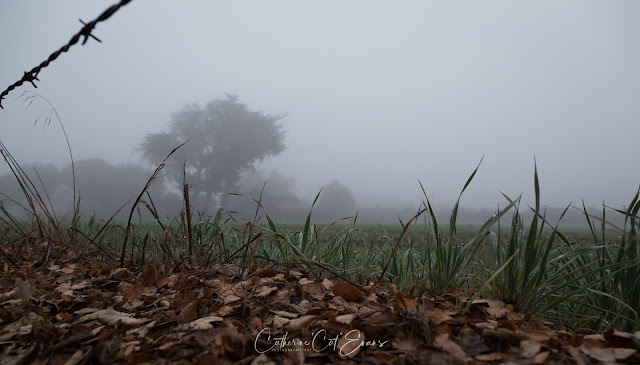 In the sweetness of friendship let there be laughter, and sharing of pleasures. For in the dew of little things the heart finds its morning and is refreshed.
Khalil Gibran 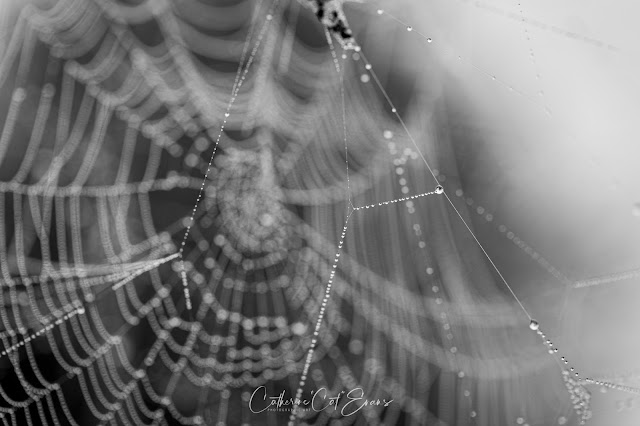 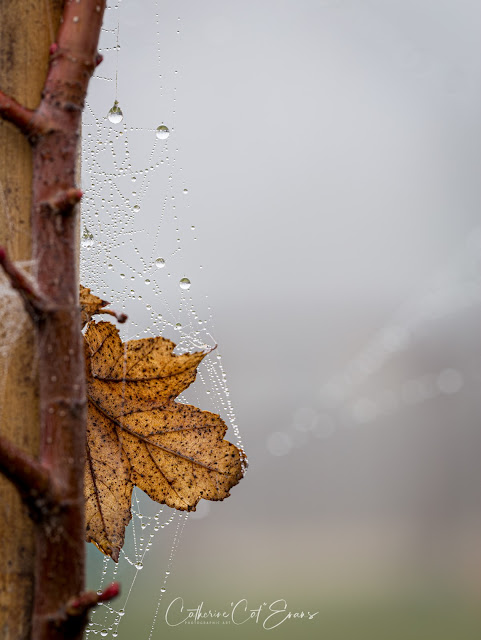 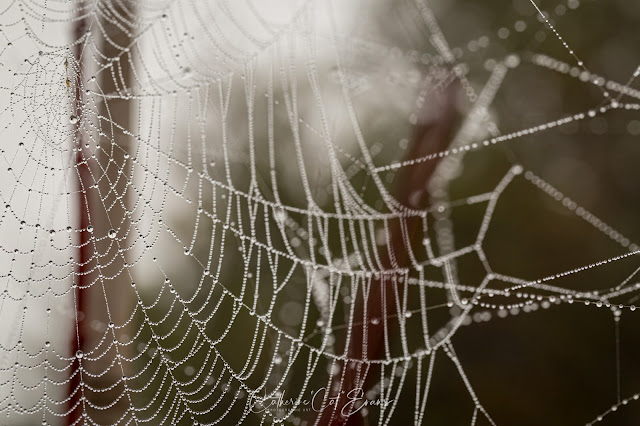 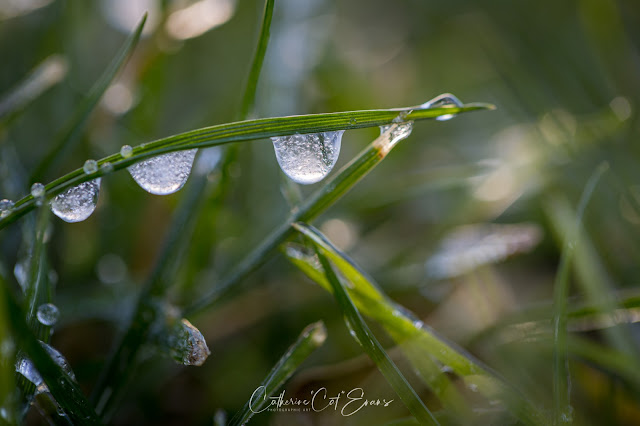 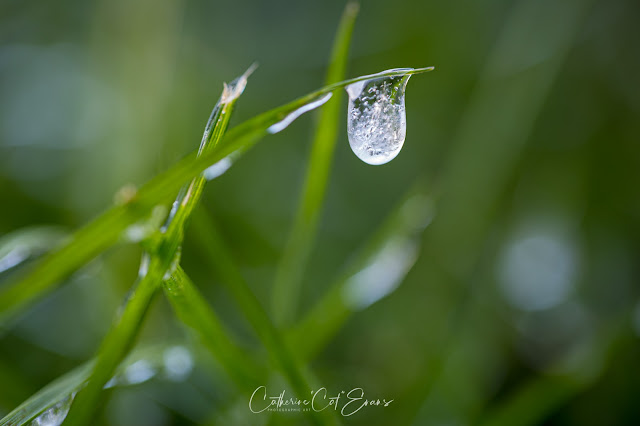 Posted by Catherine "Cat" Evans at Saturday, February 08, 2020 No comments:

In Everything There Is A Season

We, my husband and I, are taking advantage of our time by connecting and reconnecting with family.
We started in 2016 by heading east to take in family from Florida to North Carolina, Alabama, Virginia and South Carolina.  Found a 2nd cousin on my husbands side in New Mexico as we made our way cross country.
Traveling with our RV, a travel trailer (apartment on wheels) has been a great choice for us.  We get to take all that we not only need, but want.
All of my photography equipment, computer, etc. and a guitar or two.

This last month, our destination was to reconnect with a cousin of Terry's that he had not seen in many, many years and meet his wife and daughter for the first time.

But in between, we celebrated an anniversary with close friends in Nevada, and then traveled to Idaho and discovered a mysterious land we had not heard of. 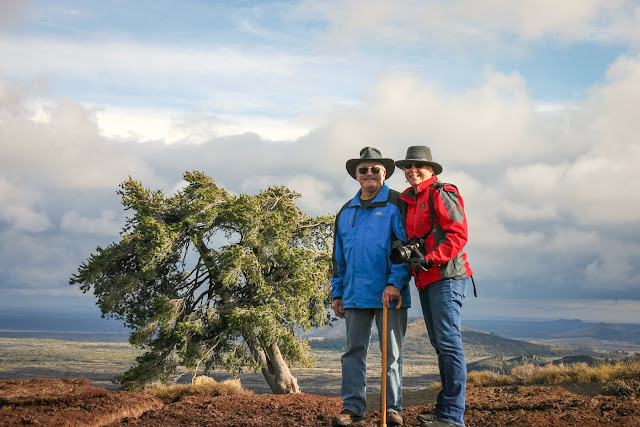 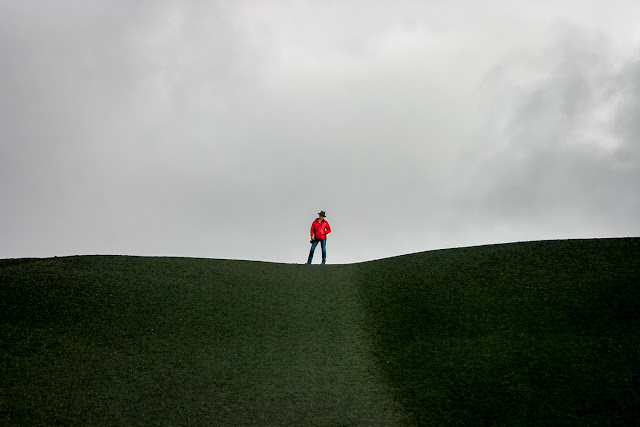 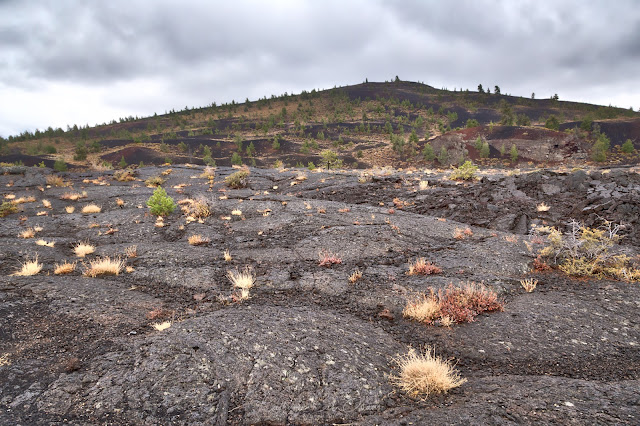 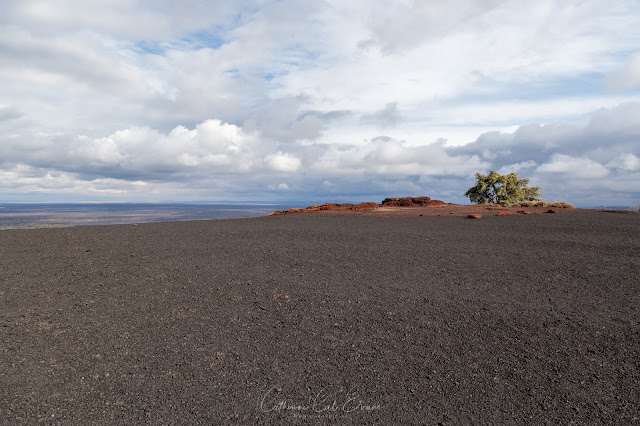 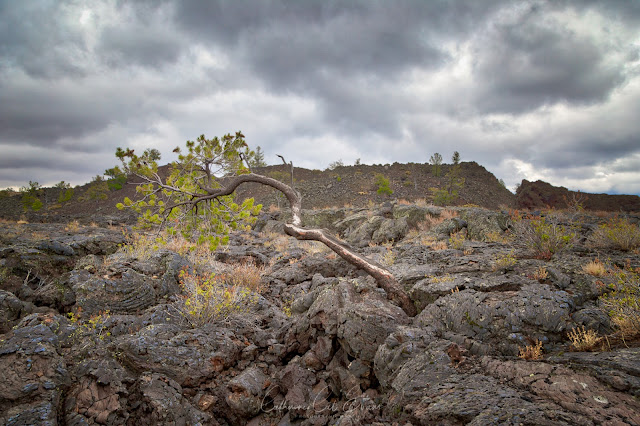 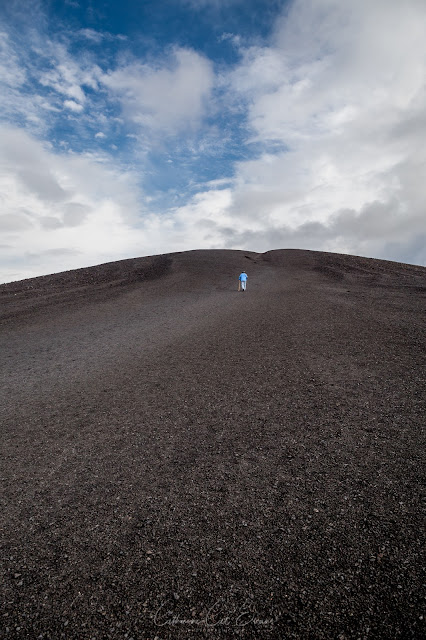 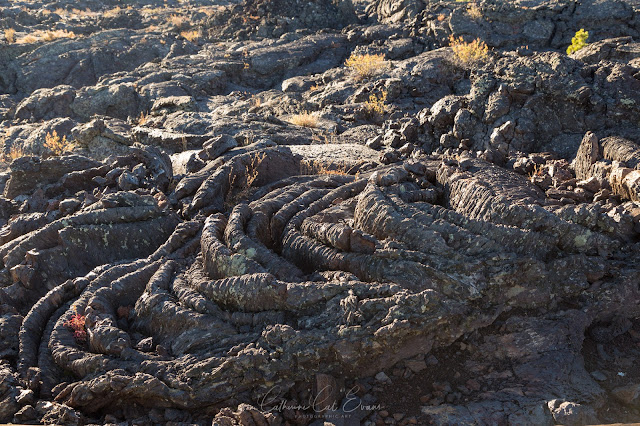 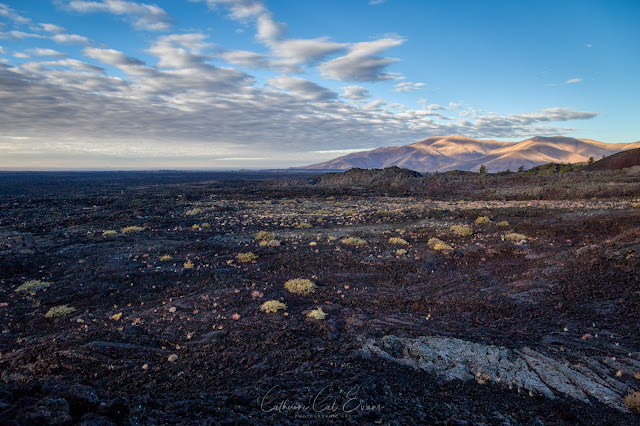 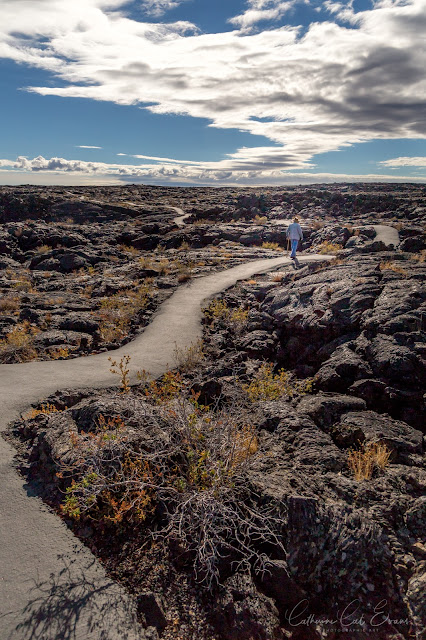 Next stop...Yellowstone WY
Posted by Catherine "Cat" Evans at Friday, October 26, 2018 No comments:

It Has Been Way Too Long

How has so much time gone by?

Since I have "officially" retired, I suppose I am finding my stride.  I always heard how you are busier now than before and I just could not understand it.
Here it is over 4 years since we sold the business, Terry had his accident that took 4 years to heal and I continued to work the first year, on and off the 2nd and totally out by the end of 2017.  And here it August of 2018.
I continue to take many, many images of life all around me.  I find it pure joy.  Although I do miss being in the Gallery in Morro Bay with other artists.  One day...I hope to get myself "back out there".
It has been so long since I blogged, that I am not really sure what to do with this.  So, for now, I will continue to post and share what I am seeing out there in the hopes that it somehow reaches out and into you.
I welcome any feedback and thoughts.
Keeping it positive. 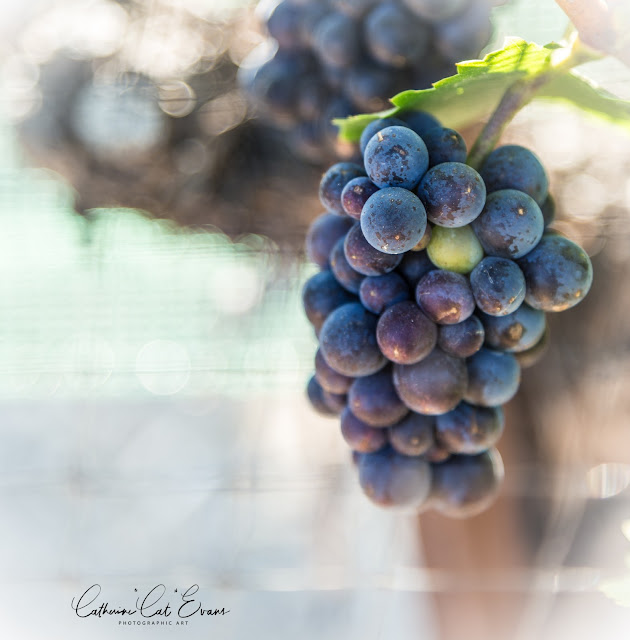 Posted by Catherine "Cat" Evans at Wednesday, August 29, 2018 No comments:

Embracing the Day in the Mornings

My experiences through my lens.

I needed to refresh how to maneuver around the site for someone else and realized, I do not remember a lot.

So this is a test run of sorts to figure out a few things.

So enjoy the pictures as I relearn this arena.

Once in awhile, a beach artist will stop by.  He built 4 sculptures this week and now will head back home. 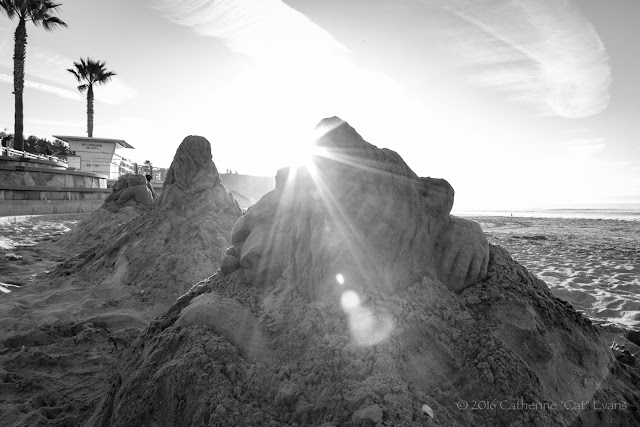 The mornings at the beach are the best start to my day and I am living my dream.  I look to my husband for my daily inspiration to up and out.
Embracing the day and no regrets.
Life is too short. 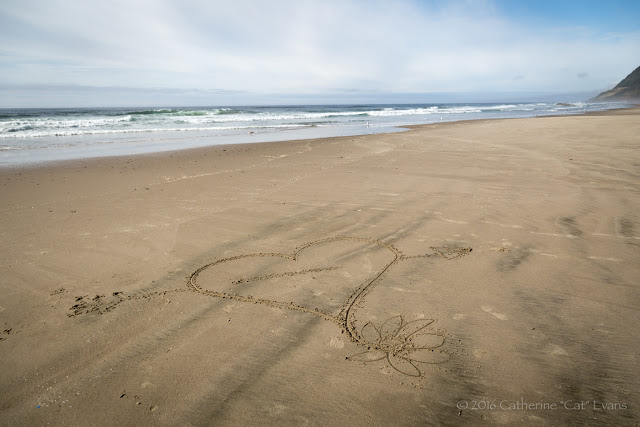 It has been a long time since I visited here.  With encouragement from my daughter, here is a start.
Life has been different these last few years.
A new dawning.

Continued progress in recovery for Terry
Safe Travels, though we saw a couple of accidents
Light Hearts
Beautiful Land to travel through

Posted by Catherine "Cat" Evans at Thursday, November 13, 2014 No comments:

Catherine "Cat" Evans
Central Coast of CA, CA, United States
4th daughter of a Marine Colonel and his Mrs., wife of the best Plastering contractor (Retired) in the county, Mother of 2 and living life on the Central Coast of CA